I recently had the opportunity to chat with the CFO and President of ViZn Energy, Craig Wilkins, as well as one of the company’s advisors, Greg Hayes. It was a very interesting discussion and it looks like ViZn Energy. has what could be a very promising grid storage technology, and the technology is just about ready for market. As always, we will have to see how the market responds. However, for now, below is a bit of info for you to chew over.

First of all, despite the name (I’ll come back to that), the company isn’t developing zinc-air battery technology, but rather zinc-iron redox flow battery technology. Its key benefits, according to Wilkins, are: “reliability, durability, safety, and low cost.” (I’ll delve in a little more near the bottom of this post.)

Despite its wide array of claimed benefits, you probably haven’t heard about this company before. The reason, according to Hayes, is that they haven’t had to go the megaphone-advertising, attract-investors route — the startup has been funded by a handful of wealthy individuals. ”We’ve been able to raise a lot of capital through private, high-net-worth individuals,” Hayes added. And I could hear the gratefulness in Hayes and Wilkins’ voices. They are well aware of the fatigue investors, experts in the field, and the broader public have from overhyped technologies that never make it to market.

As noted at the top, ViZn Energy. (ViZn Energy) is just about 6 months out from its technology being used in its first commercial project. As such, the company is coming out from under the radar more.

The company has been around for about four years in total, mostly working on nitty gritty of its zinc-iron redox flow battery technology. This is following about eight years of DOE-funded research. “We have been spending a great deal of that time developing the technology,” Hayes said, but he added that they have also been working on business outreach for the last two or three.

Basically, the company is trying to fill some niche needs at the moment, while proving commercial viability and preparing itself for greater market expansion. The first, “easy” markets to penetrate are behind-the-meter microgrid generation, Wilkins notes. But, in general, the aim is for use as a conventional grid storage technology (projects in the tens of megawatts). To date, Wilkins says, “we have had due diligence performed on us by the largest customers.” 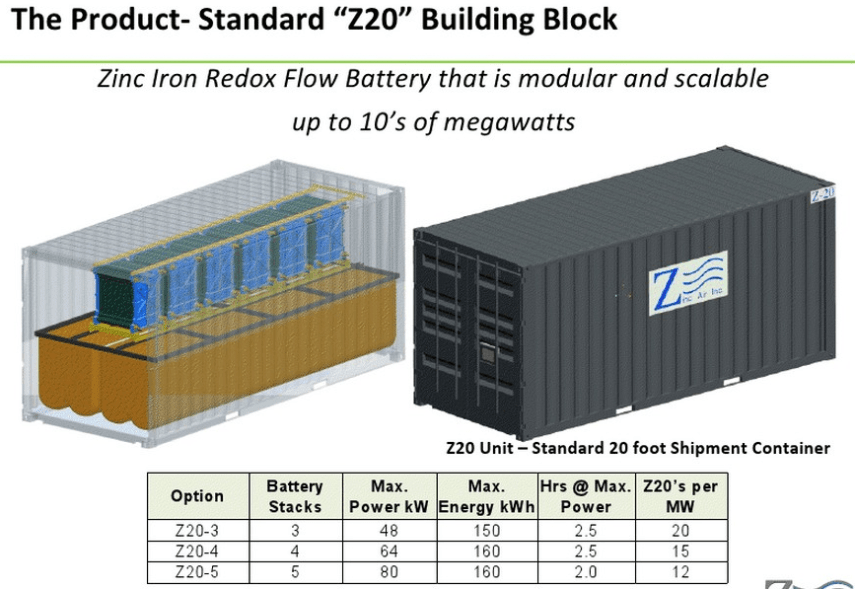 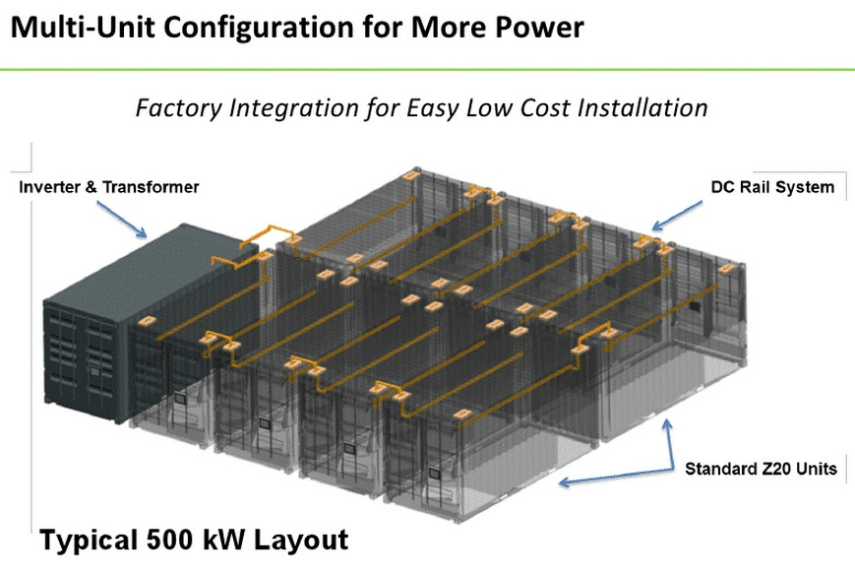 The company is looking at international markets as well as the US market. In particular, due to Germany’s relatively high level of renewable energy penetration (and renewable energy competitiveness), it is a key market ViZn Energy is looking at, and it has had a lot of discussions with key firms there. It has also had a lot of discussions with various Indian groups. Solar is now cheaper than fossil fuels in India, a lot of people are still without electricity (or reliable electricity) there, and there is a large governmental push for solar and wind power growth. I would think that India is one of the most attractive microgrid markets in the world, so it’s no surprise to hear that ViZn Energy is eager to get a foothold in there.

When the company started, it had just acquired zinc-air technology rights from Lawrence Berkeley National Labs. That’s where the name comes from. They actually still have a side company still working on zinc-air battery technology for some niche markets, but it didn’t see zinc-air technology as the best option for grid storage. Cycle life and efficiency issues make zinc-iron redox flow batteries a better grid storage option, in their eyes. Also, Wilkins noted that flow batteries scale more naturally.

Wilkins’ team has been able to get up to 100 cycles on its zinc-air batteries, and it is looking to get up to 1,000, but the demand for conventional grid storage application is for 7,000 to 10,000 cycles.

Anyway, that’s a side tangent — let’s get back to the zinc-iron redox flow batteries it says are just six months out from first deployment. There must be a lot of technical information available, right?

First of all, ViZn Energy states that its batteries are super safe, and that safety was a key focus from the beginning, and one reasons why they chose this technology over others early on in the technology planning. ”I can de-energize our battery in 15 seconds in case of any natural or man-made disaster,” Wilkins stated. They operate at ambient temperatures. They are not pressurized. And they are “closed loop” — meaning there is no potential for hazardous gases or waste by-products.

The system is an alkaline-based system. You would be able to pull off-the-shelf components together for this product. (Of course, the company has been patenting away — it has 2 patents and 15 pending patents.)

ViZn Energy is expecting this to be a 20-year battery.

6 prototypes have been tooled and tested over the past three years. Over 200 iterations have been tested, and tens of thousands of cycles in (total) have helped to demonstrate their real-world reliability.

In some follow-up questions regarding how deep they have been cycling the batteries, efficiency, and how the batteries perform in various temperatures, I got these responses from Wilkins:

The benefit of flow batteries is the “dynamic range” or the ability to use the full state of charge range. For our lifecycle testing, we use deep cycles going from 100% to 0-5%. In addition, we test using short/shallow cycles to replicate frequency regulation profiles. Our AC/AC efficiency is 72-75%.

Our battery is optimized to operate at 50°C. Our battery is very tolerant of temperature changes without significant impact to performance.

All good-looking answers to me. But I know some of our readers have much more expertise in battery technology, so I’m eager to read what you think. Naturally, we have to wait to see if the statements above hold true in commercial operation, but this is certainly a grid storage company I’m going to be keeping an eye on.

Before giving you readers the floor and seeing what you have to say in the comments below, one last thing worth noting, I think, is the current ViZn Energy team. The company has a pretty impressive Technical Board of Advisors and Business Board of Advisors. And I think its Management Team help to explain why.

I’d encourage checking out everyone on the squad, but a few notes I’ll throw in here are that there are six PhD holders on the Technical Board of Advisors, and the company’s CTO (who holds a PhD in Chemistry from the University of Victoria) was previously Coda Automotive’s Vice President for Electrochemical Research (where he was responsible for cell research, quality, and safety). Prior to that, Dr. Ron Brost was with Ford Motor Company for 12 years ”as a Technical Expert and supervisor for multiple advanced battery technology teams that developed fuel cell, battery electric, and hybrid vehicle energy storage systems.” He was also the Chairman of Ford’s Fuel Cells Patent Committee for six years.

Anyway, again, I recommend checking out the full ViZn Energy team if you are interested in learning more about this company.

Overall, the company motto, according to Wilkins, is: “Big. Safe. Cheap.” We’ll see!

Want to join the discussion?
Feel free to contribute!